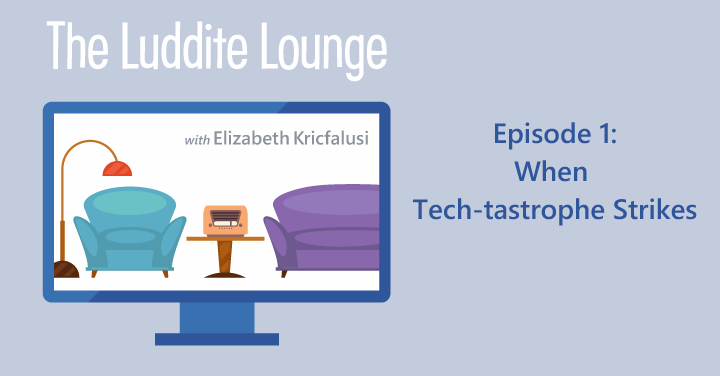 Today’s episode includes some techy news, a story and thoughts about losing work, a tech tip about Gmail, and a movie recommendation. Enjoy!

I’ll be doing a separate show about streaming in the next week or so, so will delve into more details then. In the meantime, there’s a boatload of stories online about what the update includes—and what it doesn’t.

Just remember: Ads are the way many blogs—like, say, Tech for Luddites—can afford to deliver great content. So wield your power wisely! 🙂

Corrections: In the podcast, I keep referring to the product name as Adblocker when, in fact, it’s called Adblock Plus. I also said that iOS 9 has a built-in ad blocker. It doesn’t. It just lets app developers create ad-blocking software for the mobile Safari browser.

Preventing and Recovering from Losing Work

Got a story or tip about that can help other Lounge listeners?
If you’ve got ideas about preventing or or recovering from data loss, share it in an audio message and you may hear yourself in a future episode of The Luddite Lounge!

If your Gmail is sending new messages to the bottom of your Inbox, you can reverse the sort order by mousing over the text that displays how many messages are showing on the screen.

The story of British mathematician Alan Turing and his team breaking the German’s Enigma code in World War II is fascinating and beautifully acted.

Learn how to change your email inbox to list messages in the order they come in.